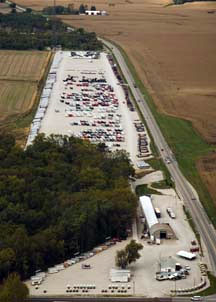 Detro Trailer Sales' humble beginnings started from an unforeseen need that arose from one of the many different business ventures of Dan and Jessie Detro.  Let's just say that in the retail business, when you take the time to listen to your customers and their needs - good things can happen.  Here is the story...

In the 1960’s, Dan began a crushed stone and dump trucking business. He opened a gravel plant to help facilitate this business, but also started buying grain from local farmers due to the local elevator closing its doors. In 1979, the original property at the corner of US 36 & US 231 was then purchased to help facilitate the gravel & grain businesses.  During the slow times, Dan and his wife, Jessie, started to sell used cars and also started a produce business to help stay productive. After a few years, these ventures were closed though and after listening to some local community members new venture soon took their place - selling hand tools and woodworking equipment.

As this business began to grow, and after listening to their customers again, Dan & Jessie decided to add several new items for sale such as outdoor lights, sunglasses, t-shirts, gifts, toys, and china cabinets.  This led to the need to add several small storage buildings to house their ever increasing inventory. This set-up worked fine until decorative pillows were added to the inventory and storage space started to fill up again.  So Dan then purchased a small, used enclosed trailer to store the pillows. This move then created an unanticipated problem - people kept wanting to buy the used trailer.  Dan & Jessie eventually decided to do what they always did...listen to their customers.

In August of 1990, Detro Trailer Sales began with an inventory of only 5 trailers.  Dan & Jessie sold three trailers in that first year - and were thrilled!  The fledgling trailer business steadily grew year after year and eventually became large enough that the Detros had to purchase more land for their ever-growing inventory.  In a few years, the trailer inventory had reached an amazing 1,000 trailers at its peak! Since the trailer sales proved to be so successful, Dan & Jessie held an auction in the early 2000’s to sell all of their remaining small merchandise and un-needed storage buildings - that is, they sold everything but the trailers.

Today, over 32 years after the original Detro Trailer Sales began, Dan and Jessie have been retired for several years but still live nearby - and check-in on the employees when they can.  The trailer business, now known as Detro Trailers LLC, is still operating under the leadership of their son, Tony, along with the loving support of his wife, Pamela and their three children.

Detro Trailers LLC now sits on over 30 acres with an average inventory of almost 800 trailers.  The business employs 8-10 people.  Detro Trailers LLC is still offering multiple leading brands of trailers such as Sure-Trac, Imperial, Cargo Express, Air-Tow, Aluma, Discovery and Cam Superline along with other manufacturers.

Today, as it has been for over 30 years, the main business objective of Detro Trailers LLC is still the same - Provide outstanding customer service while offering a quality trailer at the best possible price to the customer.